Icebergs Groan When They Die 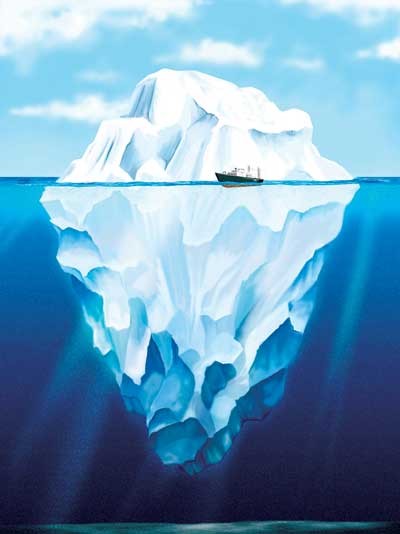 We invited prizewinning writer, Joanna Campbell to tell us about research in fiction, with reference to Hemingway's Iceberg Theory and how it applied to her new book, Tying Down The Lion. Only a fraction of what she learnt is actually used in the narrative. Here she explains why.

As I am not Ernest Hemingway, my version of his theory of omission is far less majestic. He called in the iceberg to demonstrate the writerly principle of storing unseen accumulated knowledge. My modification of the concept has produced the more prosaic Branston Pickle System. The root of this is that my husband loathes root vegetables, but enjoys pickle, provided I promise not to regale him with the list of frightening ingredients. As long as the presence of swede and rutabaga is kept under wraps, Branston Pickle can pervade his cheese sandwich.

Likewise, as part of the endeavour to entertain their readers, the inky blood, sweat and tears of an author shape thousands of words that never see the light of day, yet nevertheless remain vital components. Endless research might be carried out, but only a fraction of that is incorporated into the finished novel.

However, the unwritten stack of words, although it may never be seen again, is not discarded, to be set adrift like the massive blocks that fracture from icebergs in the process known as calving.

Icebergs groan when they calve, a trembling lament under the sea. To avoid this desolate lowing as the ice mass glides away, the writer’s bulk of residual material should form a solid, hidden base supporting and strengthening the beautiful ten percent that stands proud and prominent. Fiction can have a substantial foundation of truth, but the writer’s imagination should filter the salient points with the aim of creating something even more truthful than the author’s experience or memory allows.

With his Iceberg Theory, Ernest Hemingway believed the significant essence of a story—its kernel of candour—should not manifest itself within the words, but instead should be tucked inside, well below the surface, for the reader to discover. The author should exclude some of his knowledge from the story, yet still write from the heart, with a sincerity that allows the reader to experience his insight as acutely as if the words were actually on the page. In 'Death in the Afternoon' Hemingway stated:

"The dignity of movement of an iceberg is due to only one-eighth of it being above water. A writer who omits things because he does not know them only makes hollow places in his writing."

The hidden base of the iceberg holds the symbolism of a story, while the tip contains the basic essentials. This way, the characters’ exploits can be plainly described in the narrative while their understated significance shimmers through it. It is vital, however, for the author to be well-acquainted with the particulars he chooses to leave out and not skip them because he lacks that knowledge. As a result, the story should become weighted and grounded by its own omissions.

Piles of papers, yellowing magazines dating from over forty years ago, ring-binders stuffed with notes and reference books bristling with bookmarks provide the underpinning that shores up Tying Down the Lion. Only fragments of this material are included in the novel, but all of it facilitated my understanding of Berlin in 1967. More importantly, this mountain of facts—and more accurately, this unique setting—helped to fashion the book’s protagonists, the Bishop family.

As a would-be novelist setting out from the safe harbour of a short story about the Bishops’ impending trip to Berlin, I was unaware that the characters were suffering divisions among each other, nor that some of them had built their own internal ‘walls’. It was only after completing later drafts that I could see how the setting of the uniquely split city expressed implicit truths about its small party of travellers. On the surface, they are tourists taking in the two halves of Berlin, but just as a peach sliced in two discloses its requisite stressed-looking stone, the sawn-up city reveals the troubled hearts of its visitors.

Hemingway told Time magazine:  "No good book has ever been written that has in it symbols arrived at beforehand and stuck in."

When I reached the end of writing Tying Down The Lion, I had built an entire iceberg, the vast majority of its magnitude concealed and protected from calving. Only the details which amplify the characters, propel the action and strengthen the narrative appear in the pages.

I found out that the mileage of the Berlin Wall was 155 kilometres and that it had 259 dog runs. I learnt that when Khrushchev’s grandson was asked how the former premier was spending his retirement years, he replied, “Grandfather cries.” However, none of this information is included in the book. It is part of the foundations on which the story rests, with the aim of allowing the fictional characters to be authentic people, while the allusions and metaphor develop beneath.

If my iceberg is soundly composed, the reader, like my anti-rutabaga husband, will see—I hope—only its elegance, but discover for themselves the natural layers that wait to be found.

Joanna Campbell is author of Tying Down The Lion, published 15 June, 2015 by